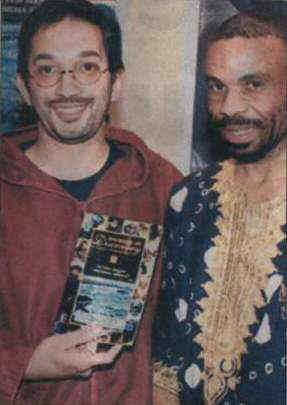 By Na’eem Jeenah and Shamima Shaikh

What is unique about these reflections is that they are the experiences of a young activist couple whose identities as man and woman are lived in absolute equality. They become almost indistinguishable as the relationship reaches a plane of spirituality where mutual love and respect elevate them to gender neutrality, if such a spiritual union is at all possible! It is all the more poignant against the backdrop of Apartheid ravages, religious bigotry and personal travails that end the death of one of them.

The Journey of Discovery is unique in its authorship, the young writers are Muslim South Africans wedged between repression and transformation, committed to challenging injustice in all its guises. Shamima Shaikh and Na’eem Jeenah waded through the difficult times that often saw the potential of marginalised youth thwarted, their dreams constrained and shattered by structured tyranny. The Marxist ideologies and the Black Consciousness Movements were appealing asylums for most young South Africans in the seventies and eighties and the young couple immersed themselves in the student protests and activities. It wasn’t enough. They were too astute, too insightful to undermine the strength of their faith, their belief in the One Compassionate and Merciful God, and it is within the comforting receptacle of Islam that their social identities were burnished.

It was a bold step, the terrain was made even more hazardous by conservative backlashes and zealous exclusions and the misconceptions that abounded both within and outside the community. The Iranian revolution had shifted the focus to a wider screen and Muslims throughout the diaspora began to stir, much to the chagrin of dominant political and religious interests. This did not deter a vulnerable group of young Muslims in whose company Shamima and Na’eem sought to define their spirituality, God consciousness and social action.

In recent years many dissertations have been written about Muslims, some have sought to understand the position of Muslim women, a pitied and fashionable cause celebre for radical feminists who have made mileage out of every conceivable feature of Islamic life which seems anathema to their perceptions of liberation. Muslim writers, including Fatima Mernissi, Rana Kabbani and Nawal El Saadawi have retaliated in some measure to restore authenticity and dignity to the debate. The Journey of Discovery is the first work emanating from a uniquely South African experience; that it is written by a man and a woman in synergy lends itself to greater profundity than was perhaps intended.

The Hajj, the pilgrimage to Mecca, symbolises the multiple levels of the Journey of Discovery, but it is by no means a ‘how-to book’, nor is it austere and staid in its style as most religious works tend to be. This account of the Hajj is personal and warm in its inclusion of the reader, intimate details delightfully become shared experiences as the couple discovers the joys of the rituals of performing their obligatory prayers. The immense thrill of being on the plains of Arafat among millions of other Muslims, in the heat of the Arabian sun and feeling an unbearable closeness to each other and God are treasured moments that make this account so different. The encounters, both spiritual and real are recounted within the context of the Qur’an and Ahadith , the utterances of the Prophet Muhammad (pbuh), the conversational short vignettes illuminate the subject with undertones of humour and sarcasm and some tongue-in-cheek observations of truly South African Muslim characteristics. It is a light and luminous text that even when dealing with the sad facts of Shamima’s illness and passing embody a spirit of surrender to the will of the Creator.

If there is a pulse that resonates throughout the book then it must be Shamima’s declaration that “I have struggled, I have exhausted myself because that is what I was created for, just as my ‘Imamah’ Hajar was created for. I can tell my Creator that I have striven.” Ultimately the Hajj - and life - is about struggle. Shamima’s life was about struggle. In the words of Amina Wadud, the eminent Muslim woman scholar, it was an ‘engaged struggle’ and Shamima was never afraid of engaging the forces that oppressed. She challenged the patriarchal structures that distorted the equality given to women by Islam, she forced men to open the mosques to women, she encouraged women to relook at the sciptures and revalue themselves as equal in the eyes of Allah, she set examples by initiating discussions around Muslim Personal Law and its inclusion in the Constitution, sounding the warning bells that if women did not insinuate equal participation at all levels of its formation much would be left to the male religious bodies and women would not be consulted and their equality imperiled.

Shamima’s emulation of Hajar, who ran between the hills of Safa and Marwa searching for water for her starving baby, is nothing short of a miracle. She believed that the striving is an end in itself and that struggle does not necessarily end in reward, but is a journey of the soul in its quest for Allah. The events recounted in the Journey of Discovery open a window to the brilliant and visionary mind of this gender warrior who still has a profound influence on women who have had the privilege of knowing her. Like Hajar, her struggle will not have been in vain as a younger generation of Muslim women strive to assert their equality and proudly reaffirm their faith knowing that women in Islam are unconditionally equal. If the feminist agenda is to change the world, then Shamima Shaikh was a Muslim feminist - and that is not a contradiction.

by Shamima Shaikh and
Na'eem Jeenah

This email address is being protected from spambots. You need JavaScript enabled to view it.